47
People have recently viewed this article.
updated on

July 19, 2022
| 13:28
Published: July 2022
add to watchlist
comments
Author
Wetzkaz
Tip
Give a tip
This content was written for adults and may be offensive.
The nightlife hotspots in Pattaya
Pattaya Hotspots
read
48

currently in trend
47
People have recently viewed this article.
updated on

19 July 2022
| 13:28
add to watchlist
comments
similar
This article is suitable for adults only and may be offensive. Show article anyway?


show always hide
Hotspot 1: has everything
Hotspot 2: a smaller version of Walking Street and a lot cheaper
Hotspot 3: many beer bars, cosy and large selection
Hotspot 4: many beer bars, very cheap, the absolute number 1 for many people
Hotspot 5: many beer bars, cheap, a must for everyone
Hotspot 6: similar to Hotspot 3, also popular

Transport from hotspot to hotspot
Transport from hotspot to hotspot
Along the first road (the road along the beach) there are countless small tuk-tuks (pickups with a loading area). Anyone can get in as they wish. Just wave to the driver. Attention: Only wave at tuk-tuks that are already moving. Standing tuk-tuks are usually waiting for tour groups and offer an individual ride. Then the cheap 10-baht price does not apply.
These shared taxis go from the north of the beach road (near Hot Spot 6) all the way down to Walking Street (Hot Spot 1) and then up the second street to the north to Hot Spot 6. In other words, always in a "circle". To get off, press a small bell that you will find above you. The bell rings in the drivers cabin. The driver stops the vehicle. Get out and give the driver 10 baht at the passenger window (left). Perfect transport. If possible, always give a 10 baht coin appropriately. 1000 baht notes sometimes cannot be changed or only with eye rolling.
Alternatively, use the smartphone app GRAB. Car or scooter from 1€ to 3€ from your hotel to HotSpot to HotSpot. The app is better because the free scooter taxi drivers usually try to charge an outrageously high price. Especially if you seem drunk. They can easily charge 10 or 20€. A big price difference that should not be supported.
Location of the hotel
The hotel should not be too far away from the evening entertainment. However, directly at the hotspots and on the main streets it can be too noisy to sleep. It is rarely quiet in Pattaya before 03:00. Every bar has loud music systems and the traffic, especially loud motorbikes in the main streets are very noisy. So it is always worth reading reviews before booking a hotel. Budget hotels in particular often have only simple wooden windows without any insulation/no noise protection. Larger hotels have this problem less often. But even these have the problem with rooms facing the main road.
Areas in Pattaya
Cookies sind nicht akzeptiert. Inhalt kann nicht angezeigt werden.
Modify
HOTSPOT 1: Walking Street
The worlds most famous entertainment mile, "Walking Street", is still number 1, but the prices are also the highest there. In particular, there are almost only go-go bars (countless) and also a few large beer bars. To make "acquaintances", the nightclubs are the cheapest option. However, guests arrive there very late. Guests can be found from 10 pm onwards. However, many ladies from the surrounding go-go bars only appear there after closing time, i.e. after 03:00. It is not uncommon for love-hungry men to wait until 3 a.m. in the big discos to avoid the barfine (a fee in the go-go bars, at least 1000-3000 baht). This is because in addition to the fee, the acquaintances earnings would also be added, which can cost another 1500 - 5000 baht. If you meet a new "acquaintance" in a discotheque, of course you dont have to pay a bar fee. The ladies charge between 1000 and 2000 baht. Similar to the total cost for an acquaintance from a beer bar. But the ladies in the GoGo bars are said to have a special beauty. To party and have fun, the entire Walking Street is recommended. Man" can spend months here without ever having seen everything. With the necessary small change, "man" has an endless choice here in the go-go bars for possible acquaintances.
HOTSPOT 2: Soi LK Metro + Soi Buakhao
2022 Soi Buakhao has become the hot spot par excellence. At least 20 new bars (big bars) have opened. Many more tourists and barmaids are now in this area than currently in Walking Street. Especially in the evening it is pleasant here, because there are many restaurants and snack bars. From 7 pm already well frequented bar complexes.

LK-METRO (Hotspot2) is a small edition of Walking Street. The street bends like an "L". Everything is a lot cheaper here. In recent years, most of the beer bars have been replaced by go-go bars. Around this area are the most booked and famous hotels from budget to luxury. You are in the middle of the "green area" and can reach everything very quickly in every direction. The entire third beach road is packed with bars and restaurants (Soi Buakhao). Tuk-tuks also drive along here. The majority, however, is on foot as every metre of this street is full of tempting bars.

Many prefer this area not only because of the street LK-METRO itself, but because there are many more streets with adventures waiting for you all around. From there, "man" can walk very quickly to Hotspot-3 (10 minutes). On the way there, there are countless other streets that deserve to be mentioned as a hotspot in their own right. For example, "Tree Town" right in between.

Also directly opposite the LK metro, the "SOI LENGKE". Extremely popular, even during the day. Here, massage shops are lined up next to each other and are well frequented even during the day. Men can drink their beer there with female company from lunchtime onwards. Walking Street and all the other hotspots only open in the evening. Soi Lengke is already busy from midday. Soi Lengke is below the number 2 on the map.
HOTSPOT 3: Soi Made in Thailand, currently still closed
In 2022, this hotspot was completely closed down. What might be built here again is not yet known.

Before:
The street has about 60 beer bars in a very small space. There is always something going on here. The selection is large. To the left and right, the bars are lined up without a gap. It can get a bit noisy here, but it is very cosy. Many spend their entire Pattaya holiday here precisely because of the combination of Soi Buakhao + LK Metro. The prices for beer and other drinks as well as the prices of the evening acquaintances are very low here. A must-visit precisely for this reason.
HOTSPOT 4: Soi 6
There are men who would like to live here forever. A continuous street from the beach road to the second beach road (Second Road / Pattayasaisong Rd). Between 5 and 30 "waitresses" can be found in each of these 50 bars. The choice of bars and acquaintances here is enormous. Many have to walk up and down the street several times because they couldnt see everything at once. The bars are almost all open to the street. With seating and alcoholic drinks, you can chat and get to know each other there or just enjoy the atmosphere.
Even at lunchtime, there is something going on here. But the real nightlife only starts in the evening. 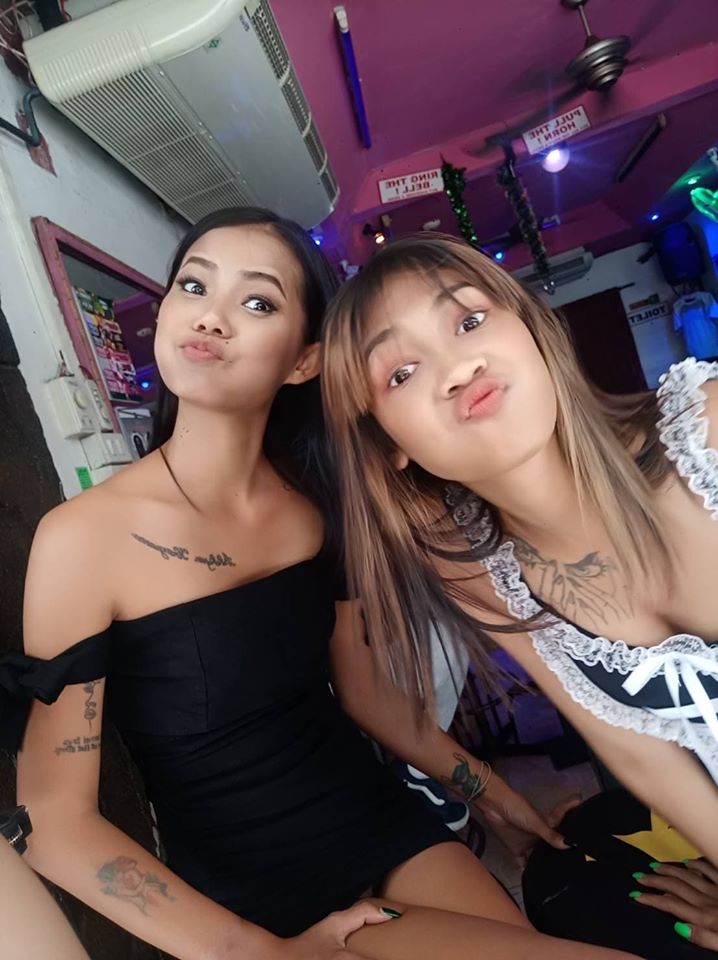 The approximately 700 "waitresses" in Soi6 are very direct and hope to go straight to the bedroom, which are located above each bar. Above each bar there are several small rooms with only one bed in them. These beds were not set up for sleeping. A staircase at the back of a bar leads upstairs. Very simple and straightforward. Since Soi6 has existed it has become the hotspot-1 in Pattaya for many as the selection is huge and the prices are some of the lowest, around 800 to 1500 baht.

Dont get confused on your first visit, "Soi 6/1" is the wrong street. One street further is "Soi 6 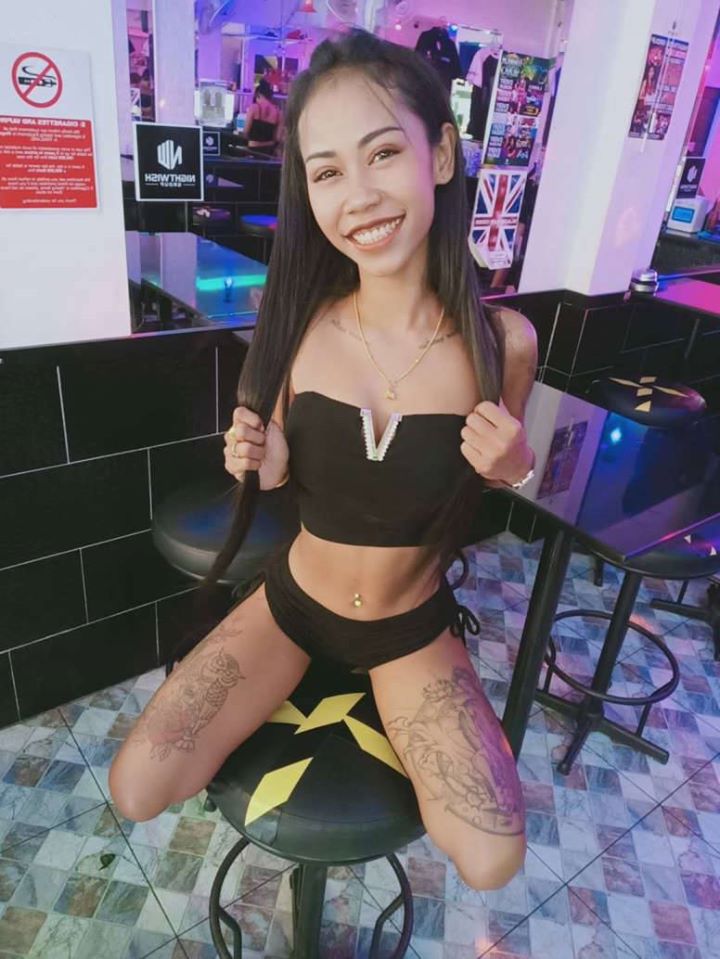 HOTSPOT 5: Soi 7 and Soi 8
There are two side streets (soi) between the beach road and Second Road. These are called Soi7 and Soi8. This is a great place to wander through the night in a group. There are many open bars for drinking and playing billiards. There is of course seating in the bar and friendly "waitresses" are also present for entertainment. The quality of acquaintances is often described as average, but for drinking and partying these two streets are unforgettable. The atmosphere is impressive and the bars are spread out along the street. So you can always find a cosy place that suits you.

The very popular restaurant "Sailor Bar & Restaurant" is also located here. The quality of the food is debatable, but reasonable prices and convivial tourists with a good atmosphere invite you to linger in the evening.

HOTSPOT 6: Drinking Street
This is an area without traffic. It resembles a large car park with about 50 bars. A bar in the middle and cushioned stools all around. The atmosphere is great. Sometimes its a bit busy here. Especially late at night, youd rather move on. However, its very good for the early evening. Youre a bit far away from the rest of the hotspots here, which would also explain why its very quiet in the bars on unspecified days. "There are 2-5 waitresses in these bars, and Drinking Street is more popular with Pattaya veterans. But it is definitely worth a detour.
The nightlife hotspots in Pattaya
Pattaya Hotspots
read
48

currently in trend
Give a tip
add to watchlist
comments
trending
Pattaya LK-Metro Soi Buakhao Walking-Street
similar
Source: bkkmarkus, own research, image: googlemaps
*All outgoing links are so-called Ref-ID links. This means that if you buy something (no one has to, of course), the linking party (in this case the author) earns a few cents without it costing you more.
comments
New on thailand-faq?
Sign up for free
Create Accountlogin
Tip
Give a tip 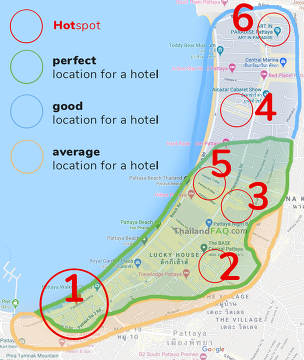